Jobin John, Corina Klug, Matej Kranjec, Erik Svenning and Johan Iraeus have recently published an article in Frontiers in Bioengineering and Biotechnology, which reports on the development of a new lineup of Human Body Models aimed primarily for virtual assessment. This study was conducted in the VIRTUAL project, funded by the European Union Horizon 2020 Research and Innovation Program under Grant Agreement No. 768960.

Abstract
Finite element Human Body Models are increasingly becoming vital tools for injury assessment and are expected to play an important role in virtual vehicle safety testing. With the aim of realizing models to study sex-differences seen in the injury- and fatality-risks from epidemiology, we developed models that represent an average female and an average male. The models were developed with an objective to allow tissue-based skeletal injury assessment, and thus non-skeletal organs and joints were defined with simplified characterizations to enhance computational efficiency and robustness. The model lineup comprises female and male representations of (seated) vehicle occupants and (standing) vulnerable road users, enabling the safety assessment of broader segments of the road user population.
In addition, a new workflow utilized in the model development is presented. In this workflow, one model (the seated female) served as the base model while all the other models were generated as closely-linked derivative models, differing only in terms of node coordinates and mass distribution. This approach opens new possibilities to develop and maintain further models as part of the model lineup, representing different types of road users to reflect the ongoing transitions in mobility patterns (like bicyclists and e-scooter users).

In this paper, we evaluate the kinetic and kinematic responses of the occupant and standing models to blunt impacts, mainly on the torso, in different directions (front, lateral, and back). The front and lateral impacts to the thorax showed responses comparable to the experiments, while the back impact varied with the location of impact (T1 and T8). Abdomen bar impact showed a stiffer load-deflection response at higher intrusions beyond 40 mm, because of simplified representation of internal organs. The lateral shoulder impact responses were also slightly stiffer, presumably from the simplified shoulder joint definition. This paper is the first in a series describing the development and validation of the new Human Body Model lineup, VIVA+. With the inclusion of an average-sized female model as a standard model in the lineup, we seek to foster an equitable injury evaluation in future virtual safety assessments.

Summary
The models were developed with a balance of anatomical detail in selected body regions of interest and computational efficiency. As a first evaluation of the model, kinetic and kinematic responses were compared to experiments in simple blunt impacts. The front impact to the thorax showed reasonable force-deflection response, while the abdomen forces were overestimated after 40 mm of intrusion. The lateral impact to the shoulder exhibited a slightly stiffer load-deflection response, while the responses in lateral impact to the thorax, abdomen, and hip were close to experimental responses. In the back impacts, the model responded with force magnitudes similar to the experiments at T1 impacts and similar deflection responses at T8 impact. The development of models of this scale and complexity is a continuous process, and this study with simple blunt impacts serves as the first step towards further verification and validation. The development workflow and the Open Science approaches employed for the models make them well suited for collaborative research and makes them accessible to a wider user group. With the inclusion of an average female model as the norm in a model lineup and with the capabilities of the ecosystem to represent a wider range of road users, the VIVA+ models provide the means to enable an inclusive approach in future virtual assessments. 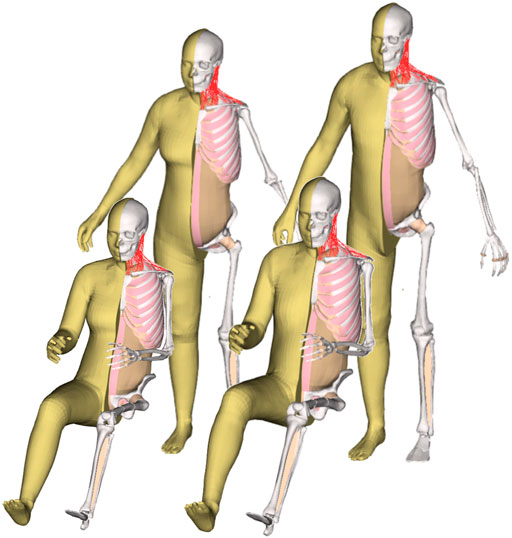 Figure: The VIVA + model lineup: the base model of the average female with the derivative male and corresponding standing versions.