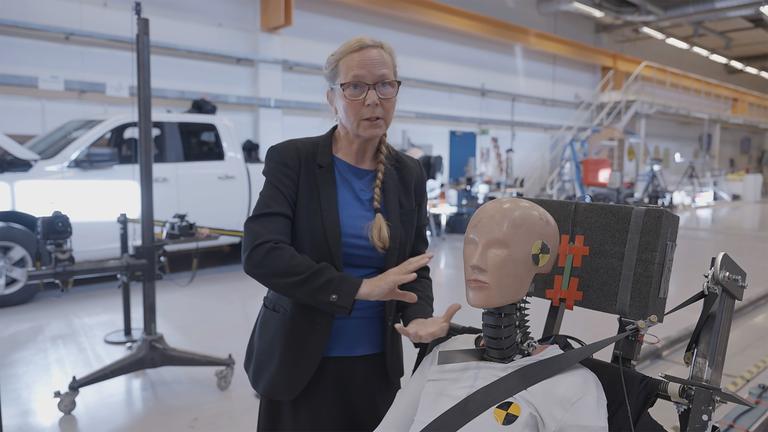 Women are almost half more likely to be seriously injured in an accident than men. Especially in rear-end collisions, women are exposed to a significantly higher risk. To this day, the dummies used in regulatory crash tests have almost exclusively the size and constitution of an average man.

In order to address this, tools are needed which represent the female part of the population. Astrid Linder (VTI) shows the prototype BioRID 50F, which has the weight and height (62 kilos and 1.62 meters) and spine joint properties of an average female. The dummy is specially designed for whiplash protection assessment. Astrid Linder is engaged in the process of having occupant protection assessed equally for both the female and the male part of the population.

The program also contains animations of the VIVA+ models developed in the VIRTUAL project showing the difference in kinematics in a frontal impact in a generic environment, developed by Johan Iraeus (Chalmers University of Technology).

Astrid Linder: “The fragment in Leschs Kosmos shows the recent research progress in the assessment of occupant safety where we have developed both prototypes and virtual dummy models of average females as well as detailed virtual models, so called human body models. These models and dummies illustrate that the knowledge concerning the female part of the population is available to be used in the same way as we do for the male part of the population.”

The item does not focus on the VIRTUAL project, but the broadcast shows the importance of the work done by the VIRTUAL consortium.
Have a look at the recording (short version – German spoken):